Advocacy Alert: Trans elders must be counted in the National Survey of Older Americans Act Participants 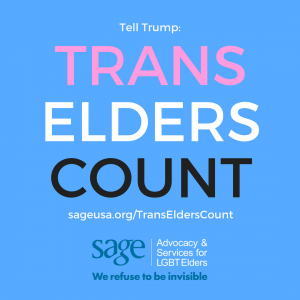 This spring, the LGBT Elder Initiative joined with SAGE and LGBT aging advocates across the country to oppose the Trump administration’s plans to remove questions on sexual orientation and gender identity from the National Survey of Older Americans Act Participants (NSOAAP). The NSOAAP is federal aging survey that determines how billions of federal dollars are spent on elder care and support. Removing these questions would make it harder for the aging services network to understand and address the needs facing LGBT older adults. We argued that this is a time when we need more data on the experiences and needs of LGBT elders in our country – not less of it.

The good news is that after pushback from the country’s leading aging advocates, bipartisan opposition in Congress, and comments from tens of thousands of Americans (including through SAGE’s  #WeRefuseToBeInvisible campaign), the administration has added questions on sexual orientation back into the NSOAAP.

The bad news: The new draft of the NSOAAP continues to erase trans elders. The Trump administration still refuses to recognize transgender older adults in the survey – And that is completely unacceptable.

There are several ways to get involved to stand up for trans older adults and to voice your opposition to this erasure.