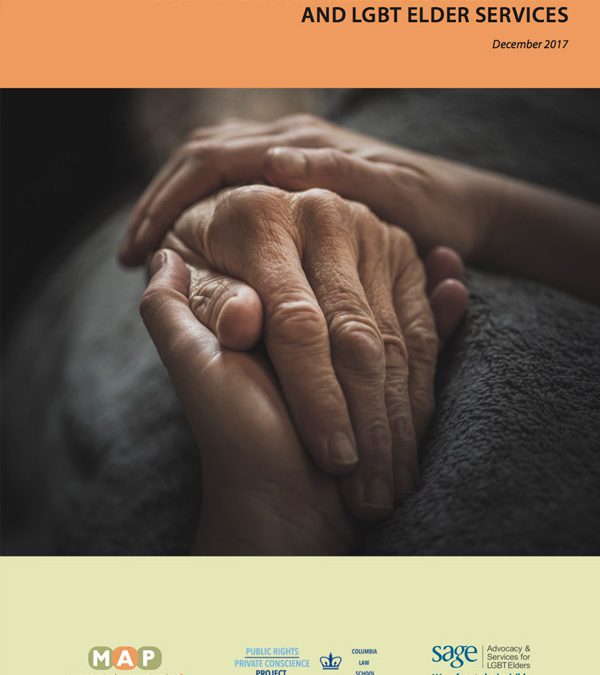 The Movement Advancement Project (MAP), in collaboration with SAGE and the Public Rights/Private Conscience Project at Columbia Law School, has released a new report on the impact of religious exemption laws on the provision of services to LGBT older adults. The report, “Dignity Denied: Religious Exemptions and LGBT Elder Services,” outlines current efforts to pass and expand religious exemption laws and highlights the ways that such laws increase the risk of discrimination against LGBT older adults.

Religious exemption laws allow service providers, including those working in the aging services field, to refuse services to individuals based on the provider’s religious beliefs. Such legislation allows individuals, businesses, and government contractors to use religion to discriminate against LGBT people, as well as other marginalized groups.

According to MAP, more than 40 bills were introduced in the 2016-2017 state legislation cycle that would have created a license to discriminate for individuals, government employees, government contractors, healthcare professionals, adoption and foster care agencies, and those providing marriage-related services.

The issue is currently being debated by the Supreme Court in Masterpiece Cakeshop vs. Colorado.

“It is estimated that there are approximately 2.7 million LGBT adults aged 50 and older in the United States, 1.1 million of whom are 65 and older. LGBT older adults, like many older Americans in the United States, rely on a network of service providers as they age–for community programming and congregate meals, for health care, and for housing ranging from independent living to skilled nursing. Research finds that a majority of these services are offered by religiously affiliated organizations.  While many of these religiously affiliated facilities provide quality care for millions of older adults, there is a coordinated effort to pass religious exemption laws, issue executive orders and agency guidance, and to litigate court cases to allow individuals, businesses, and even government contractors and grantees to use religion to discriminate. These laws are particularly worrisome for LGBT elders. Religious exemption laws jeopardize the security and safety of LGBT older adults at a time when they are most vulnerable and most in need.”

The full report can be downloaded for free here.